A Case for Empathy

So as many New Yorkers do on a summer Saturday morning, I left my apartment with my roommate in search of iced coffee. As we approached a local Bushwick coffee shop, I stopped in my tracks. This particular coffee shop had a sandwich board outside. On it, there were two arrows: one pointed further into Bushwick with the words “K2 Zombies” and another pointed towards the coffee shop with the word “Safety.” My empathetic Aquarian heart sank. To me, this sign articulates everything that is wrong in our increasingly tumultuous world.

For those who don’t know about the K2 epidemic in New York, here is a very brief summary: I live right off the Myrtle Broadway J/M/Z subway stop and over the past year this area (right on the border of Bushwick and Bedford Stuyvesant) has become a hub for people looking to buy and get high on K2. K2 is a very cheap type of synthetic marijuana that has been sold in bodegas around the city as a type of “herbal incense.” The drug is extremely toxic and last Tuesday, approximately 33 people in my neighborhood were sent to the hospital suspected of overdosing on it. The scene on the streets was chaotic and very quickly, there were law enforcement and media everywhere. (I have linked to the New York Times article below)

Then, four days later, I come across this sandwich board outside this local bougie coffee shop. The inside of the coffee shop is bright and clean. It sells three dollar iced coffee. Outside is a neighborhood in crisis. As the sign states, you can either come into their establishment to seek “safety,” or deal with the reality of the chaos outside.  What type of message does this sign send to the neighborhood, the city and our great, global world? It creates an "us vs. them" mentality. It dehumanizes people and shows a complete lack of empathy for the 33 people who just overdosed on an extremely toxic and addictive drug.

I understand as a business owner being frustrated with the disorder that this drug has created in the community and wanting to see progress and change, but I do not condone making a joke out of a group of people who just nearly lost their lives.

Bushwick and Bedford Stuyvesant are experiencing rapid gentrification. Living in these neighborhoods, you see scaffolding everywhere and many of theses sorts of “safe” coffee shops opening up. My roommate and I joke about a Whole Foods moving into a construction site near us, this all happening right beside a massive drug problem. So although the K2 epidemic is fairly recent, the sandwich board sign is a metaphor for a neighborhood at a tipping point. It seems to point to a greater economic divide fueled by gentrification.  “Just ignore the tumult. Everything will be ok. Come into our comforting, familiar arms,” the sign seemed to say.

In a world where black communities are losing their young men to racist fueled violence, where the gay community loses 50 people in a night club attack, where one person drives a truck into a crowd at a celebratory event in Nice, France, where millions of people are forced to leave their country due to a war that is in no way their fault, a world where we seem to be in constant crisis mode, can’t we just express a little empathy towards each other?

Instead of writing a mean note on your sandwich board, can’t we see these “K2 Zombies” as human beings? The fundamental problem with our society is that people think some lives are worth more than others and what this sign says to me is that if you can afford our coffee, you can enjoy our beautiful “safe” environment. You, the patron, are worth something. The sign indicates that the “K2 Zombies” are some sort of circus freak show to be laughed at, made fun of, and then ultimately ignored.

No -- it's not fun on your way to the subway to have to wade through a group of people who have no sense of their surroundings, to smell the chemicals emanating from the K2 cigarettes. It's also not fun being addicted to an extremely toxic drug.  But you know what? We get to go back to our “safe zones” and not everyone does. I do not have a solution for the K2 epidemic, but I choose to express compassion towards people in a desperate state.

So do we choose to do what the sandwich board says and hide in our little “safe” spaces, or do we engage with our community? I believe we can do better and realize that we are a community, a city, a country, a world in crisis and we need to open our hearts and minds.

If we all did what were are supposed to do-- if we watched out for each other, truly took care of each other, if we didn’t hide in our “safe spaces” -- maybe we wouldn’t have poverty, injustice and a K2 epidemic at all. Instead of the phrase “stay safe”, maybe what we should really be saying is “let's take care of each other.” 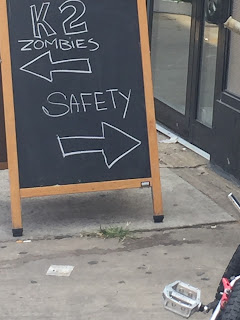